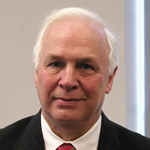 Dr. Crow received his B.S. and Ph.D. degrees in mechanical engineering from University of Missouri-Rolla in addition to an M.S. degree from Rensselaer Polytechnic Institute. He joined Pratt & Whitney in 1966, rising to the position of Senior Vice President of Pratt & Whitney’s Engineering organization in May 1997, where he was responsible for the design, development, validation and certification of all Pratt & Whitney large commercial engines, military engines and rocket products.

Dr. Crow previously held the position of Senior Vice President for PW Large Commercial Engines organization that included the PW4000 and JT9D high thrust engines. He is a past secretary of the Society of Automotive Engineers and past president of Pi Tau Sigma.