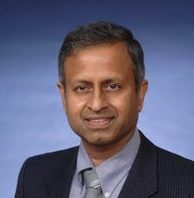 Dr. Vijay Srinivasan is the Division Chief of the Systems Integration Division (SID) of the Engineering Laboratory (EL) at the National Institute of Standards and Technology (NIST).

Dr. Srinivasan comes to NIST from IBM, where he was most recently the Chief Standards and Solutions Officer for Product Lifecycle Management (PLM); and Program Manager for PLM Research, Standards, and Academic Programs at IBM. In this capacity, he set the IBM standards vision and strategy for PLM work and was responsible for implementing these standards in IBM’s PLM products through nearly 50 IBM staff members worldwide.

Dr. Srinivasan has been a vocal and constant voice for the use of open standards in IBM PLM products – a business line at IBM with over 1 billion dollars of annual revenue. Before that, he was a line manager in IBM’s T.J. Watson Research Center leading research in the areas of geometric modeling, CAD/CAM, robotics, standards for geometric dimensioning and tolerancing, and data exchange.

Dr. Srinivasan also served as an adjunct professor of mechanical engineering at Columbia University, where he has taught geometric modeling & computations and integrated product development. He was a member of the Technical Advisory Committee of the standards consortium PDES Inc., and industrial advisor to ProSTEP iViP consortium. He is the Vice-Chairman of the US Technical Advisory Group to ISO/TC 213. Dr. Srinivasan is a founding member of the American Society of Mechanical Engineers (ASME) Y14.5.1 committee on mathematical definitions of GD&T, and is an ASME Fellow. He has published widely, and his book, “Theory of Dimensioning: An introduction to parameterizing geometric models” was published by Marcel-Dekker in 2004. He recently co-authored a book on “SOA Approach to Enterprise Integration for Product Lifecycle Management.