by Kassidy Manness
ME Communications
kassidy.manness@uconn.edu 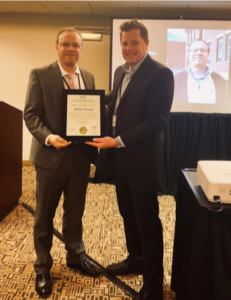 Prof. Norato receiving the award from Prof. Chris Mattson on behalf of the Design Automation Committee

This award is given once each year “to recognize an outstanding young investigator who is making noteworthy contributions in the area of design automation, including research in design representation, design optimization, design evaluation, and/or design integration.” The award was presented at the ASME’s Design Automation Conference, which was held on August 18-21, 2019 in Anaheim, California. This conference brings together every year international experts in the field of design automation.

Norato was given this award based on the work and research he has done in topology optimization. Topology optimization is a computational methodology to automatically design parts to maximize structural strength with minimal amounts of material in the most efficient and effective way. A major focus of Norato’s research group is to do the topology optimization employing exclusively certain shapes, like bars or plates, that make manufacturing with conventional processes easier.

An example of the work Norato does with topology optimization

Prof. Christopher Mattson presented the award to Prof. Norato “in recognition of his expertise in topology optimization, specifically his advances in stress-based topology optimization and development of the geometry projection method” and to “recognize his continuous and dedicated service to the Design Automation Conference and his outreach to the community.”