Design, Build. Compete. UConn Formula SAE Among the Best in the World.

by Kassidy Manness
ME Communications
kassidy.manness@uconn.edu

Formula SAE Club ready for another exciting year of designing, building, and competing. 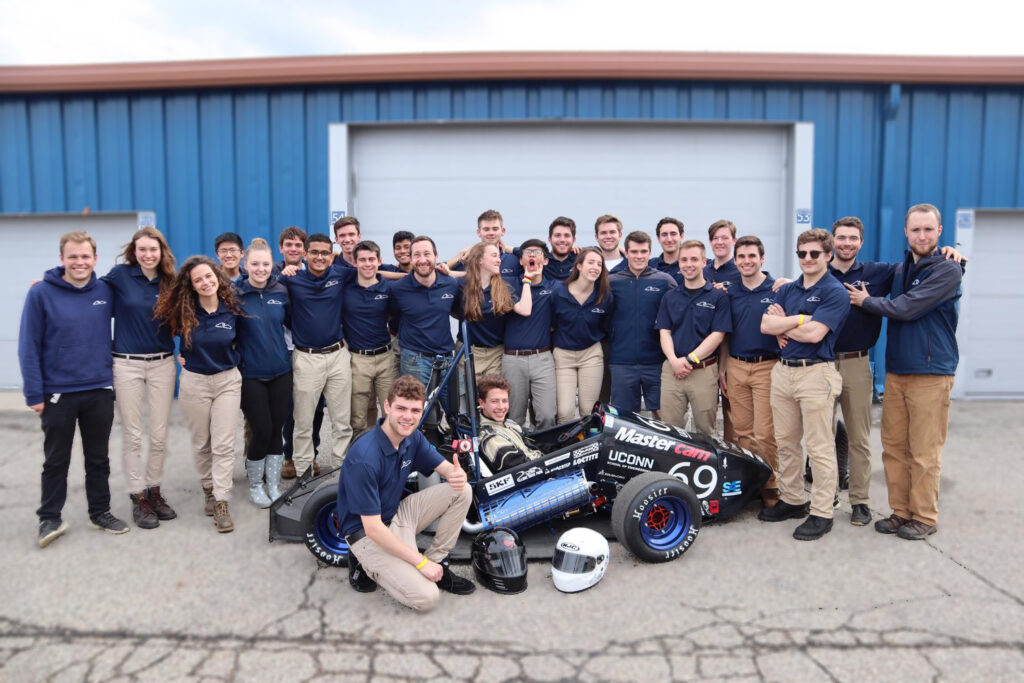 “Design. Build. Compete” is the motto that drives the determined and creative minds that make up the Formula SAE club here at UConn. Their club, consisting of many Mechanical Engineering students, is responsible for designing and building, all on their own, a formula style race car that is supposed to compete in two competitions by the time May rolls around.

Every season, the club, headed by president, Cara Connors, breaks up into subteams that are each responsible for one aspect of the car. An average meeting, which happens every Tuesday and Saturday, consists of the head of each subteam reporting out any updates, set backs, or solutions they have and saying what their next steps are. At this point in the year, the main thing each club member is working on is the design portion where they work on calculations and talk with the other subteams to make sure it will all work together. As the year continues, they will then focus more of the building and fabrication work before going into the testing of the car to ensure that it works. Everything is done by students, though; the driving, testing, and manufacturing, even though the do have some help from local and extended sponsors in order to help with the manufacturing costs and equipment. 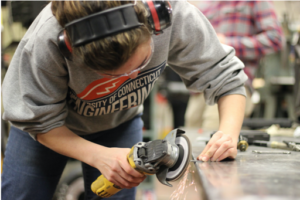 Consistently, throughout the season, the club looks at the past models they have created and evaluate what went right and what can be developed further. Connors was able to mention a few of the changes and development they were making to the design this year, “Last year was the first year that we had an aerodynamic package, so an undertray on the car. We’re looking to develop that further, validating the design we had last year, and making it better for this upcoming year. We’re looking at better ways to mount that undertray. There’s a lot of weight optimization going on.”

What all of this ultimately leads up to for the club are two competitions, the Formula Michigan, which occurs in May, and the Formula North Competition, which happens in Ontario, Canada at the beginning of June. UConn’s club has done consistently well at each competition, but they usually base the success of their car on the Michigan competition, as it is the largest one. It, generally, has about 120 international teams that come out. This past year, UConn’s Formula SAE placed 11th out of the 120 teams. Connors said that they are hoping to crack the top 10 this year. 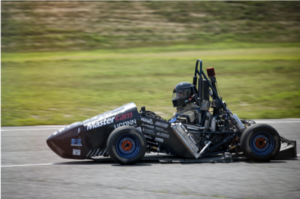 At the competition, there is more than just racing that occurs in order to decide the winning cars. There are multiple dynamic events that they compete in to test the car’s physical performance in acceleration, skidpad, autocross, and endurance. There are also static events that are evaluated to look at the cars design presentation, business marketing presentation, cost report, and fuel economy.

Formula SAE is open to any major, not just Mechanical Engineers. They meet every Tuesday at 6:30 pm and Saturday at 12 pm at their shop on Depot Campus. For any interested, new members, you can go to the Visitor’s Center and be picked up by club members thirty minutes before the meeting begins. If you have any other questions, you can email the president, Cara Connors, at cara.connors@uconn.edu.