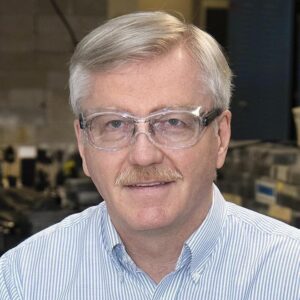 Abstract: Being comprised entirely of charged species, ionic liquids (IL) and molten salts (MS) have dramatically different properties compared to conventional molecular liquids and they provide new and unusual environments to test our understanding  of physical chemistry phenomena. We are interested in how IL and MS properties influence physical and dynamical processes that determine the stability and lifetimes of reactive intermediates and thereby affect the courses of reactions and product distributions, for example in the areas of primary and applied radiation chemistry, radical chemistry and charge transfer reactions. A key issue in IL radiolysis is the competition between the solvation of the  initially-formed excess electrons and the scavenging of electrons in different states of solvation. Pre-solvated electron scavenging is especially significant in ILs because their relatively high viscosities make their solvation dynamics 100-1000x slower than in conventional solvents. The slower relaxation dynamics of ILs make them excellent media for the general study of fundamental radiolysis processes, in combination with BNL’s Laser-Electron Accelerator Facility (LEAF) for picosecond pulse radiolysis studies. With LEAF we can observe the solvation processes of radiolytically- generated excess electrons and compare and contrast them with the mechanisms of pre-solvated electron scavenging. In molten salts, identifying the primary radiolysis products and characterizing their reactivities is important to understand the chemical evolution of the molten salt fuel over the duration of its lifetime in the reactor. Examples will be given of how the composition of the salt determines the identities and reactivities of the primary radiolysis products. The work on molten salts was supported as part of the Molten Salts in Extreme Environments Energy Frontier Research Center, funded by the U.S. Department of Energy Office of Science. The work on ionic liquids was supported by the U.S. Department of Energy, Office of Science, Office of Basic Energy Sciences, Division of Chemical Sciences, Geosciences and Biosciences, under contract DE-SC0012704.

Biographical Sketch: James Wishart earned his Bachelors degree in Chemistry from the Massachusetts Institute of Technology (1979), and his Ph.D. in Inorganic Chemistry from Stanford University (1985) (Advisor: Henry Taube, Nobel Prize in Chemistry, 1983). Dr. Wishart is currently a Senior Chemist in the Chemistry Division of Brookhaven National Laboratory, where he has worked for 32 years. He has been studying the physical chemistry and radiation chemistry of ionic liquids, and recently molten salts, for 18 years. Dr. Wishart is currently the Director of the Molten Salts in Extreme Environments Energy Frontier Research Center. He is the leader of the BNL Accelerator Center for Energy Research (ACER), including the Laser-Electron  Accelerator Facility (LEAF) for picosecond pulse radiolysis, which he also built in the 1990s. In September 2019, he received the Maria Skłodowska-Curie Medal from the Polish Radiation Research Society, for his distinguished achievements in the field of radiation chemistry and long-lasting and productive cooperation with Polish scientists.