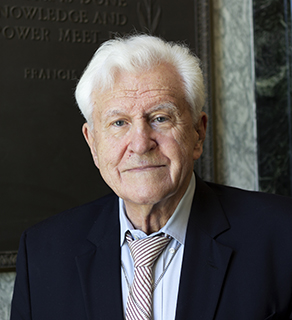 Dr. Bzymek joined the faculty in 1981. He received his B.S. (1959) and Ph.D. degrees (1967) from Warsaw University of Technology, Warsaw, Poland, and his M.S. in Structural Engineering from the University of Michigan (1961). Until 1981 he was a member of the faculty at the Warsaw University of Technology as Research Director of the Institute of Bridges and Highways. With his co-workers he developed a structural analysis system, STRAINS, with graphics output. He was also a Chief Editor of the Polish periodical Research Works on Automatization of Engineering Structures and a member of the editorial board of the monthly Highways. He worked with design and consulting firms and was an advisor to several Polish agencies and the Warsaw Office of the United Nations. Dr. Bzymek has been an active designer and several of his designs have received awards. He has developed several courses in Computer-Aided Engineering Design and Foundation of Engineering Design. Dr. Bzymek is a computer graphics expert and an active member of ASME and the Association of Computer Machinery. He has contributed to the theory of design by introducing several new principles.